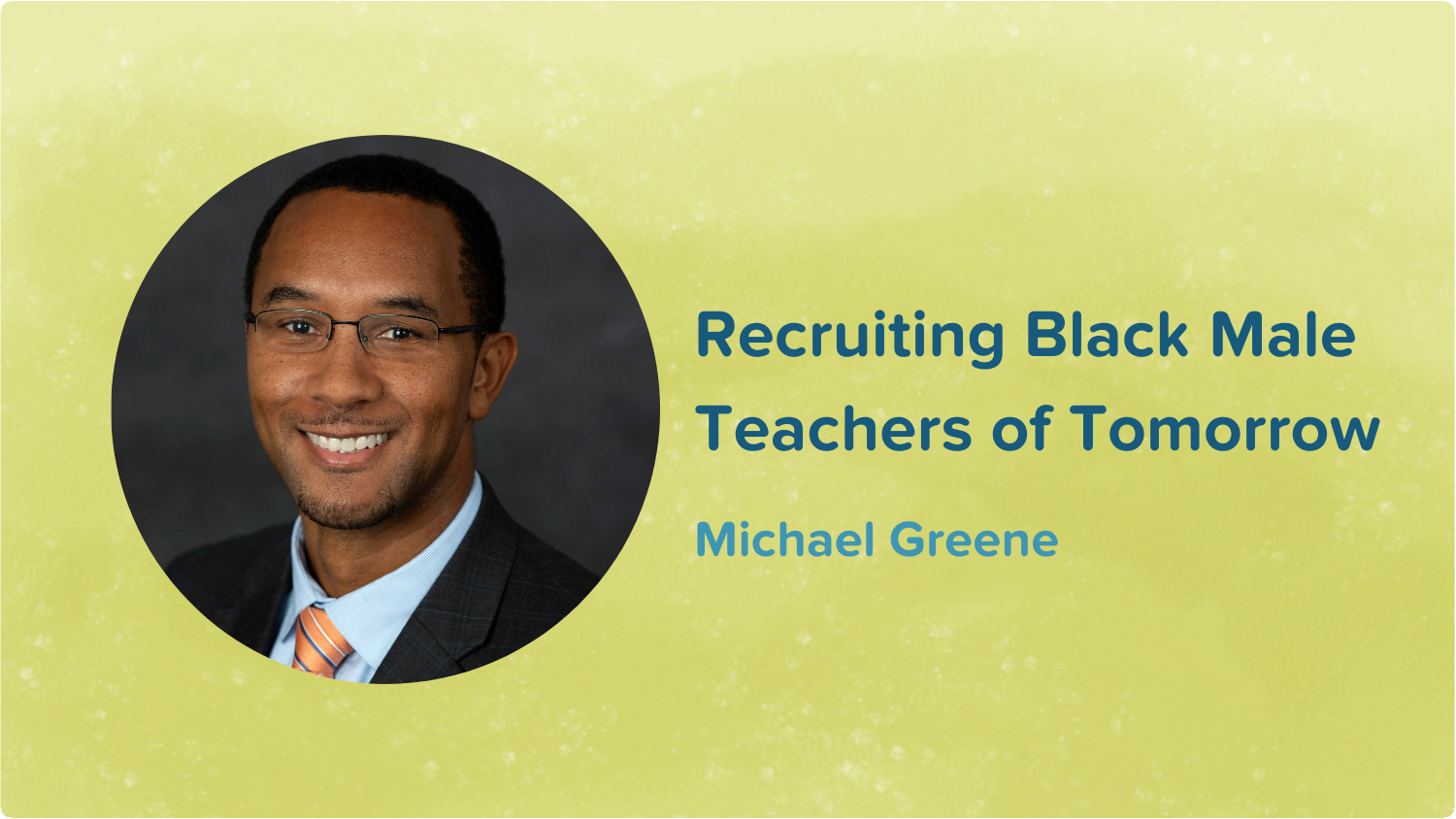 “Should I say something? If I don’t, then who will?”

That was a small portion of my train of thought during a training for the school staff. The presenters shared data which illustrated various topics in schools, including school staffing demographics. There were several opportunities for staff members to share personal stories, opinions, and feelings with the group in an effort to become more culturally responsive.

As a bullet point about the exceedingly low percentage of Black male teachers appeared on the screen, a thought came to me. Rehearsing a few words in my head for a moment, I stood up and asked if I could share something.

Standing among 100 or more of my colleagues, I began by saying, “So as we reflect on the information in this presentation, I’d like to put a face to some of what you see, particularly as it relates to the percentage of male teachers of color currently in our schools. You see, for the past eight years, in two different buildings, I have been one of just two Black male faculty members at each place…”

As I looked around the room, I saw many sympathetic eyes glancing back up at me. Some seemed surprised; many others nodded in understanding as I correlated my own K-12 experiences to the present day. Through some personal examples, I attempted to underscore the importance of having a diverse staff and the benefits that such representation has for every student.

From kindergarten through high school, I had approximately one Black male teacher. Just one. He was my high school business and marketing teacher, Mr. Jones. He was terrific, inspiring, and he made learning fun. He had an enormous impact on me and, I imagine, on many others. He was also my track coach and would later go on to extend his impact as a high school principal and district leader.

Coincidentally, I followed in some of his footsteps by earning a college degree, teaching marketing and business to high school students, and also coaching track and baseball. However, I did not realize his significance and the full impact he had on me until years later and well into my career. Reflecting back on that time, Mr. Jones was very influential. He exemplified a positive male role model and even encouraged me to come back to the area and teach. His demeanor, his professionalism, even some of his sense of humor I would later try to emulate in my own classroom.

There were and are hundreds of elementary school students nearby that could go through the next several years without having a male teacher of color. This was something I wanted to be sure the whole staff recognized. Studies, including one by researchers at UConn, Johns Hopkins University, American University, and the University of California-Davis, have shown the positive impact that teachers of color have in the classroom and on student success.

So how can schools recruit more Black male educators to classrooms?
And how can districts also recruit even more Black men to underrepresented specialist positions and leadership roles? Understandably, it has been difficult for many schools to recruit more educators overall. Search online for the words “teacher shortage”, and the results show that districts across the country were facing extreme shortages with fewer individuals entering the profession even prior to the Covid-19 pandemic. That leads me to wonder whether teacher recruitment could be refocused to begin as early as elementary school now.

The Virginia Department of Education (VDOE) offers a statewide program for high school students called Virginia Teachers for Tomorrow. Designed to draw more teacher candidates from the high school level into the profession, this program includes curriculum and hands-on experiences for upperclassmen. This is a wonderful program that offers students many benefits and even opportunities for employment after college. Earlier this year, the VDOE also introduced a new pilot program called, Grow Your Own Teacher. This program provides grants to low-income graduates that teach in a high-need public school after college. If not currently in place, and with proper funding, I believe programs like these could also be implemented in other states and school districts.

How can schools inspire young Black men to become teachers?
I would propose that schools introduce elements of programs like Teachers for Tomorrow to their younger learners. The next Rodney Robinson or Michael Bonner could be walking into a third grade classroom this fall! Schools can begin to identify, encourage, and nurture these students through any related after-school clubs or activities, if not yet in place. Additionally, these opportunities can exist to generate more productive outlets and invite students of color into mentorship programs that encourage career paths in education. Imagine if we plant such seeds and tell students early and often enough that they can grow to become great teachers. They could end up doing just that and blossom into even more!

Representation matters
I currently have an extraordinary opportunity to help serve the needs of an elementary school. I am grateful to be in a role, with considerable support, that enables me to assist teachers, students, and their families with technology. While I may no longer be a classroom teacher, I still have an awesome opportunity to educate, inspire, encourage, and set a good example for some of our youngest learners. As a Black male, I am equally conscious of the chance to be a positive male role model and help remedy any number of stereotypes. I am passionate about student learning and achievement and strive to be an inspiration in our schools. I still recognize the significant impact that Mr. Jones had more than 20 years ago now and I intend to continue paying that forward.

Michael is a Technology Support Specialist at Laurel Hill Elementary School with over 12 years of teaching and coaching experience. He is passionate about student learning and achievement.