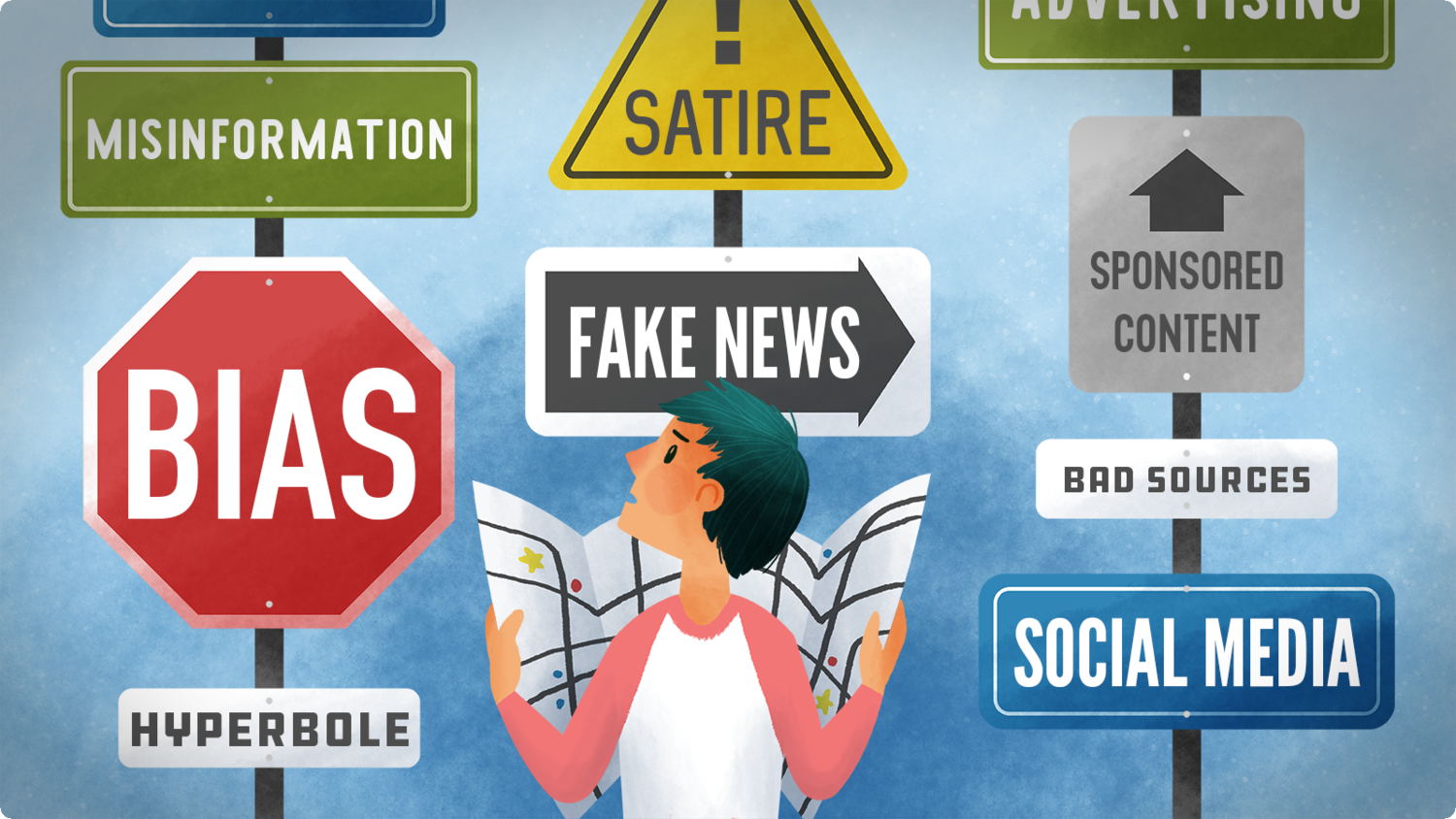 The Internet is a fascinating place, where nearly any information a student could possibly need is available at their fingertips, 24 hours a day. It’s a beautiful thing! But it’s also a bit of a minefield, where anyone can publish anything and claim it’s the truth. Part of a teacher’s job in this day and age is to help students identify what information they can trust and what they can’t. But with so much misinformation out there, where do we start?

To help, we’ve built a Deck (for Google Slides and Powerpoint) ready to present to your students, with examples for them to work through and learn how to think critically about the information they receive online. Feel free to customize it for your own class! Let’s take a look at two ways we can evaluate the trustworthiness of a piece of information.

Get a copy of the Deck, Navigating the Media Minefield: Click here for Google Slides and here for Powerpoint

Who and Why?
It’s not ironclad, but a solid way to begin evaluating is by identifying the source, and asking some basic questions about them. Who is giving me this information? More importantly, why are they giving it to me? Organizations rarely publish information out of the goodness of their hearts; someone has to get paid. Are they using the information to sell you on a product, service or idea? Did someone pay them to write this information? Some simple questions to ask:

Those are all pretty easy examples, but sometimes a source can be trickier to identify. In particular, students need to be wary of sources that can be edited by anyone with a computer. This is a big category, but the most obvious example is Wikipedia. That doesn’t mean there’s no good information on Wikipedia — quite the opposite! But it’s best to treat Wikipedia as a jumping-off point for research, rather than as research itself. Clicking through to the sources cited on a Wiki page is a good start; you can read the information straight from the source, not filtered through someone else’s personal biases.

Another good rule of thumb is to look for more than one source saying the same thing. If you see a news article claiming that Rick Moranis isn’t in movies anymore because he was abducted by aliens, maybe keep searching for confirmation. If you see a number of trustworthy sources who all agree about that, it’s more likely to be true. (Although I really hope not.)

The Bias Problem
Even “trustworthy” sources, like newspapers, can have their biases. According to a 2014 survey by the Pew Research Center, the news outlets with the most “center” audiences are the Wall Street Journal, USA Today and BBC News. NPR and PBS are classified “almost center,” but lean slightly to the left. Among the sources considered most biased in the survey were the Huffington Post and Mother Jones on the left, and Fox News and the Blaze on the right. Sticking to trusted outlets closer to the center is generally a better way to conduct research.

There’s also the question of how far removed a source is from the original facts. Did you ever play Telephone at slumber parties? Someone whispers something into their neighbor’s ear, who then whispers it to the next person, and so on. By the time it makes it back around to the first person, the sentence is usually almost unrecognizable, due to misheard and misremembered words passed on. The same thing happens with facts. A single fact — for instance, “a cheetah is one of the fastest land animals” — can be passed to someone who adds some factual embellishment to it, creating “a cheetah can accelerate faster than most cars.” This is still true! But then the third source simplifies it to “cheetahs are faster than cars,” and a fourth one extrapolates that to “cheetahs will outrun your car and eat you.” So now you’ve got a statement that is neither true nor helpful, and is just pointless fear-mongering. Generally, the AP and Reuters are closest to the original information, and news aggregation sites like Patribotics and Drudge Report are furthest from it. The most accurate information will usually be the least-filtered information.

Next week, we’ll discuss a few more ways students can evaluate the information they encounter online. In the meantime, check out the Deck we’ve created to give your students practical examples!