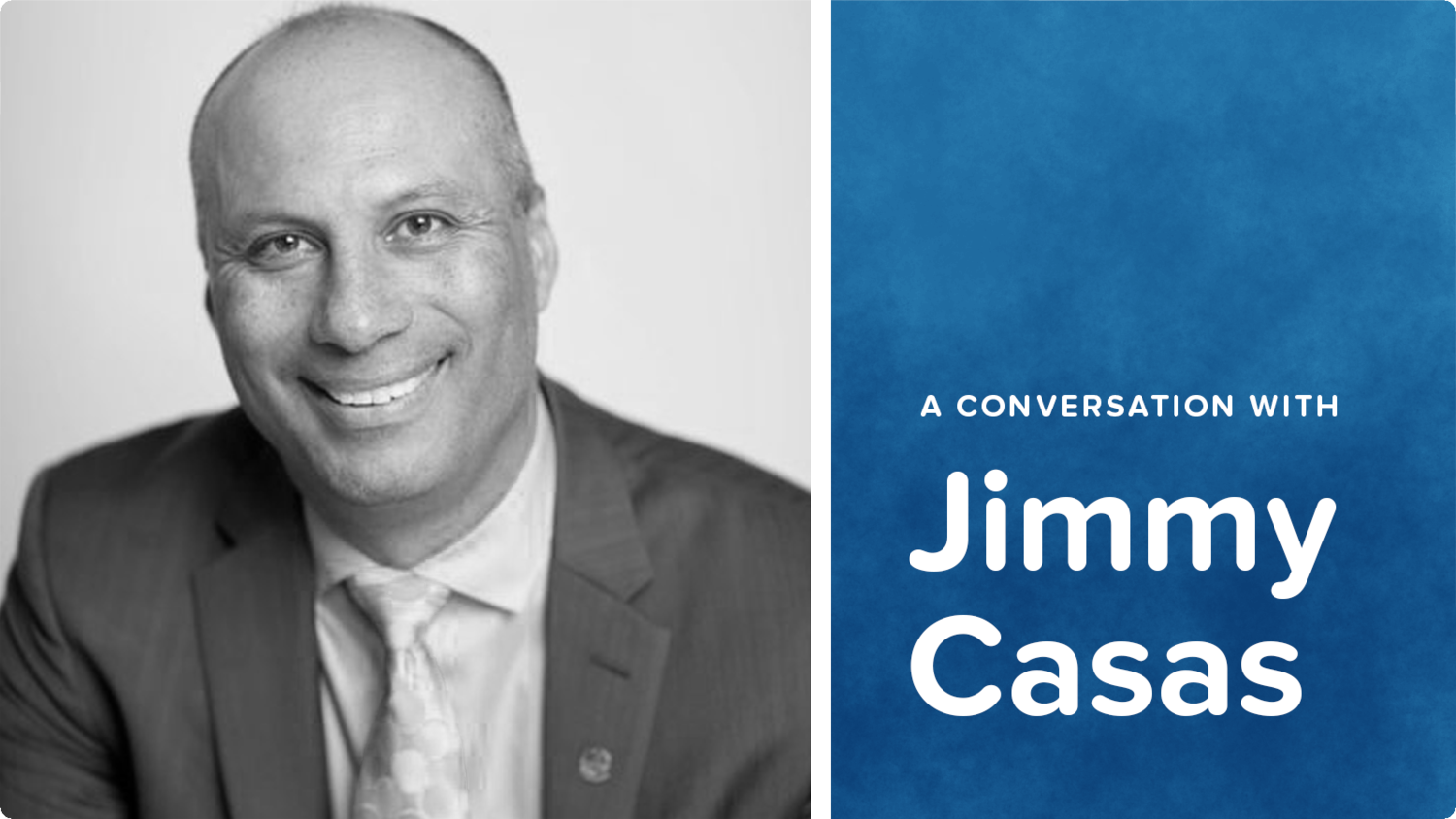 Jimmy Casas is a former high school principal and nationally-recognized educational leadership coach, speaker, and best-selling author. In addition to receiving awards on both the state and national stage as an outstanding principal, Jimmy serves in an advisory capacity for the National Association for Secondary School Principals, and Future Ready Schools, a project of the Alliance for Excellent Education.

We recently had the chance to chat with Jimmy about his personal journey, his work, and what he sees as some of the biggest issues challenging school leaders today.

Q: For those who aren’t familiar with your story or haven’t read your books: What was your educational experience like?

JC: “My parents always instilled in us the importance of the value of an education. They didn’t have high school diplomas and were migrant workers. They made the decision to break away from the family business and stay in Iowa, away from all of our family, knowing that it would be a tremendous sacrifice, but also knowing that it was the only way to give their children the quality of life that they so desperately aspired for. So it was one source of inspiration for me, to not let them down.

Unfortunately, I was not good at school and hated it. I never saw myself going to college, I struggled right from the very beginning and all the way throughout my career in school. I just wanted to work like my dad. I was only able to get through school because of my assistant principal Mr. Morgan, who was a champion for me and invested in me, and I'll always be grateful to him for that. I still consider him and his family really good friends.”

Q: Not having a good school experience yourself, how were you drawn to education as a profession?

JC: “I took a sales job out of high school and I was successful at it, but saw how tough this gig was. So I made the decision to go back to school, and it was the best decision I ever made. I graduated with a degree in Spanish and actually wanted to get into the FBI, so I spent two years doing that. The process to get accepted into the FBI is long, so they encouraged me to find something to do in the meantime. I went back to grad school and got a teaching assistant position at the University of Iowa, and started volunteering at an elementary school with an ESL program. I just kind of fell in love with teaching.”

Q: Under your leadership, Bettendorf HS was named one of the best high schools in the country three times by Newsweek and US News and World Report. What about that school made it stand out?

JC: “Bettendorf had already been doing great things and was seen as one of the best in the state before I got there. But when I arrived in 2002, the demographics of the community were shifting and more people were coming from urban areas. And with that comes a shift of student population — we had more students who were struggling, dealing with more poverty, families who needed more support. And that was a change for the staff.

I started my career in Milwaukee Public Schools and worked with a similar population, and learned so much about how to work with students who were reluctant learners like me. I was mentored very well by people in Milwaukee, who helped me understand how to work with children — all children, regardless of race, or socio-economic status, or disabilities — and that began to influence my core values when working with kids. When I returned back to Iowa, I think they were looking for someone who had some experience working with different types of students.

Growing up in Muscatine, we had always admired Bettendorf schools. But when I walked in there, I was surprised, because I had expected more. I think they had rested on their laurels a little bit and shifted into an adult-centered culture while things were going well. But with this new population, they were having some challenges, and we really had to shift the mindset from ‘we’re here for us’ to ‘we’re here for the kids.’ I give a lot of credit to the staff — it’s not an easy change to make, and not only were they willing to do it, they wanted to do it. I think that’s what changed things. How do you take a large school but build a vibrant, engaging culture that doesn’t make it feel like a big school?”

Q: How do you create that kind of feeling?

JC: “Every school has issues, we’re dealing with impulsive teenagers. But even with that, I think the kids in Bettendorf understood that regardless of the mistakes they made, or the issues that happened, they believed the adults were invested in them and cared about them. Kids believed that they’d always have an adult there that would advocate for them, and I think the parents believed that as well.

It's not uncommon for schools to believe they're successful, yet there's a gap of kids who school is not working for. It's easy to fall into the trap of, ‘we’re a really good school’ — and you are for 93% of the kids, but there are 7% of kids it's not working for. So, if we're going to talk about all kids, then that is going to require a shift, because that means shifting away from the status quo and doing things differently to impact all kids.”

Q: What do you say to an educator who is reading this and realizes they need to make changes but doesn’t know how to start?

JC: “First, you have to transform your belief system; you have to at least believe that it can actually happen. You also have to understand that you need to be strategic in your approach because you can't do it by yourself. That is the mistake I constantly see — principals go into buildings believing that, ‘Well I’m the leader, so I need to make this happen,’ or ‘I'm the teacher in the classroom, and I need to make this happen,’ and it can fool you. Leadership was never meant to be a committee of one. You can’t sustain that over a long period of time.

The second piece is building a community of leaders. If you really believe that everybody has talents and strengths and has the capacity to lead, then how do we intentionally begin to build that capacity? That takes a different skill set. You need to be able to convince people, to show them what excellence looks like, what the impact could be for kids. Then you begin to invite others to lead with you; you empower them and allow them to be part of the decision making.

But ultimately, at the end of the day, it all begins with an investment in relationships. To really know people and their skills, you have to invest a lot of time in them. What is the legacy they want to leave? What are the skills they bring to the situation? What talents do they have? How do you continue to cultivate them and challenge them effectively? How do you have difficult conversations with them?

These are the skills that we need to cultivate in our school leaders, and the reality is that those skill sets take a lot of time, and a lot of practice, and a lot of investment to build. That is what builds the undercurrents of a culture, below the surface where you can’t see it, but that’s where culture really lives. And that's where I try to help principals today, to identify where their undercurrents are so they can create a healthy culture.”

To read more about Jimmy Casas and his work with school leaders, visit https://jimmycasas.com/