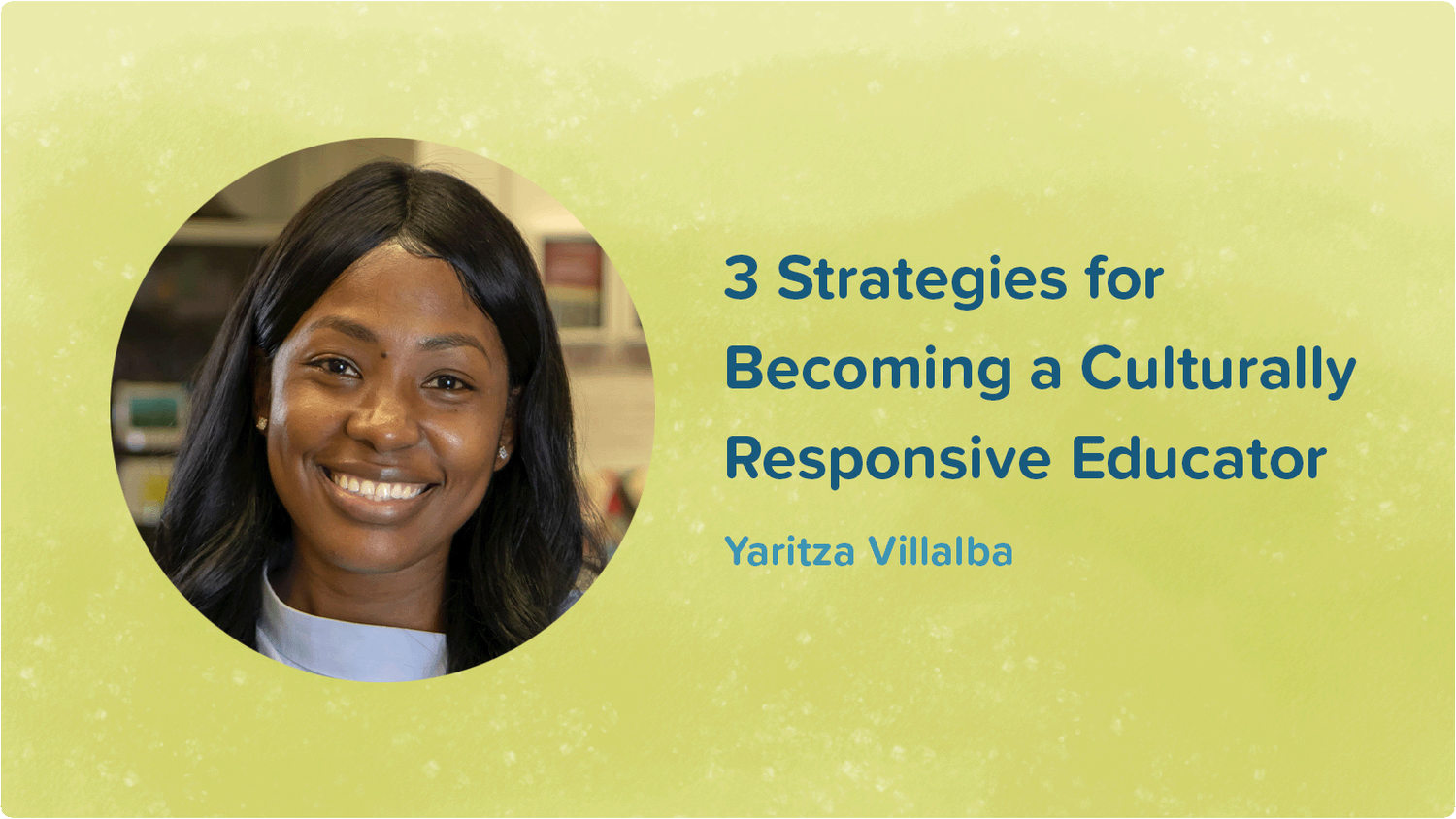 For many, finding out you're expecting is a celebratory event. Many soon-to-be parents begin to shop for infant clothing, plan for unforeseen events, and read many baby resources that encourage them to purchase a ton of things they will never use. I was one of those soon-to-be moms. Hi, my name is Yaritza Villalba. I am an educator, an advocate for culturally responsive education, and above all else, I am McKenzie’s mom.

Two years ago, I discovered I was expecting and just like that, an alarm went off in my head. Not because I was soon to be a first-time mom but because, in my opinion, the world into which I was bringing a baby was on fire. I’ve always understood the importance of culture, diversity, inclusion, and equity. As an Afro-Panamanian woman, I was raised to understand the uniqueness I brought to the classroom and eventually a workplace. Sadly, this is not the case with everyone in the world. How about I give you some more context?

After migrating to the United States from Colon, Panama, I began school. Because my primary language and that of my entire family was Spanish, I was placed in English as a Second Language (ESL) class. This experience felt like torture. As one of the youngest siblings, language acquisition was a piece of cake. English quickly became my primary language. Although I had mastered the English language, my placement did not change.

Through middle and high school, I took courses that were titled “Native.” Native was for students who had just arrived in the United States. No one helped my family understand they had the right to sign me out of this course. We read books in Spanish that I could not relate to. I was forced to read books where the characters did not resemble a Brown-skinned Latina. I felt isolated — I didn't feel a sense of belonging and yearned to be in a regular English class with schoolmates I had known my entire life. I had many teachers that taught about the significance of African American history, but none of them ever taught about Hispanic heritage. When they did acknowledge heritage or culture, it was through a one-day celebration: Cultural Awareness Day.

Once I became an educator, I believed it was my mission to create opportunities for students to see themselves not only in what I taught, but in my classroom decorations, daily lesson planning, and after-school activities. There were many times where the actions I had taken were not mandated by the district, but I felt would benefit all of my learners and families. If you desire to become a culturally responsive educator, here are three steps that will help you on your journey.

The first strategy of becoming a culturally responsive-sustaining educator is acknowledging your own personal biases. Being culturally responsive means you are reflecting on your own pedagogical practices and how they impact each of your students. How do you plan? What forms of assessment are you implementing: assessment of learning, assessment for learning, or assessment as learning? Who are you planning for? When designing coherent instruction for your students, you must be willing to get to know them prior to creating assessments/rubrics. Who your students are, where their families are from, and what their beliefs are should inform how you teach them.

Early on in my career, twelve years ago, I learned of my own biases. I taught based on my own experiences and failed to acknowledge those of my students. Our own biases are what prevent us from making those connections with students and families. I tackled those biases by asking students about their learning style. I stopped thinking about how I learned best and became eager to know more about how they learned best and what methods they preferred.

This is where I was introduced to the idea of playing music daily for my students. In getting to know both myself and my students better, I learned we listened to the same genre of music. Each day I would play a different mix from one of the musicians students liked. It became our thing! Most importantly, on the days the music became too much for them, we would collectively make the decision to turn it off or play it at a low volume.

I no longer made assumptions about how my students should learn. They taught me to be open-minded and that it’s okay to step outside the box. As time went on and my student population changed, so did my pedagogical practices. Your practices should remain flexible with time. This gives you the opportunity to grow continuously. Every individual student contributed to who I was as a high school Social Studies Peer Collaborative teacher educating overaged, under-credited students in Brooklyn, New York.

Of course, there were some days I wanted to give up. Those were the days I reminded myself that many before me had given up on my students and that's why they were now in my class. I remembered what I felt like as a student and the many experiences my students were facing on a daily basis.

This leads me to the second strategy for implementing culturally responsive pedagogy in your classroom and school environment: relevancy. Students should be able to see themselves in the content you are exposing them to and how you share that content with them.

When I became pregnant, I reached out to my professional learning network through social media for culturally responsive book recommendations. I wanted to expose McKenzie to books she could picture herself in; books that enhanced critical thinking skills; books that would encourage her to ask “why.”

There was an outpouring of support. I received so many children’s books in the mail. I spent the next five months of my pregnancy journey reading through each book. However, I realized there were two aspects missing from the 40 books I had received: Not one of the characters in the books would be responsive to McKenzie’s culture and heritage, and most did not have Black and Brown main characters that would most likely share the same interests as McKenzie.

I searched all around for the perfect book, only to conclude no one had written it. As educators, we have a duty to all of our students and families. It is easy to say you have created an inclusive classroom because you have books that have Black and Brown characters in them. This does not make you a culturally responsive educator. Providing books for students that speak to their unique interests, cultures, and ethnicities is what empowers them to be their best.

In December of 2021, I sat down on my bed and wrote McKenzie’s Time Machine, a culturally responsive children’s book that encourages students and adults to explore the contributions of Black and Brown trailblazers not mentioned in traditional textbooks. McKenzie’s character is a young girl who loves exploring, making friends, and wearing sneakers. I wrote McKenzie’s Time Machine for my daughter. I wanted to expose her to the names that are purposefully left out of teaching curricula. After publishing this book in February of 2022, I quickly realized how imperative it was for teachers all over the world to share this text with their students and their children.

Students should know about racism just as much as we teach about war. Racism exists everywhere and our students experience it in one way or another, yet teachers are afraid to create or capitalize on the opportunity for students to share their thinking about the world in which we live.

Many of you are wondering where to begin with race conversations. I would say first you must establish rapport with each individual student and family. This will lead to open and respectful communication. Next, you should always create student-centered opportunities for roundtable discussions. Finally, just hear your students out. Just as we are experiencing these uncertain times, so are they.

Ready to Do the Work

I wrote this book for educators who are ready to do the work! This includes those who want to know more about Black and Brown trailblazers from the past and present that have spoken up against unfair treatment in social institutions. McKenzie’s Time Machine acknowledges the fact life began on the continent of Africa. It reminds Black and Brown children from marginalized backgrounds that their history and lineage is one of achievements, and not what they see on TV or have read in colonized texts.

The first step to being a truly culturally responsive educator is simply having a passion for seeing all of your students succeed.

Yaritza has twelve years of experience in education. Throughout the years, she has developed culturally responsive-sustaining resources for teachers and parents. Yaritza is currently an Educator Innovation Lead (EIL) at Flip, Microsoft, focusing on cultural and linguistic diversity in urban and rural education. Her mission is to provide strategies and resources that spark critical thinking and meaningful conversations in and out of the classroom.